OLYMPICS, PAST AND FUTURE

CELEBRATING MORE THAN 120 YEARS OF SPORT

Today’s Olympic Games, both summer and winter, are major international gatherings organized to have thousands of athletes compete in dozens of sports. But these spectacles have come a long way since the Olympic movement was revived just over 12 decades ago.

While the ancient Olympic Games can trace their history back to at least 776 B.C., the modern Olympics have only been contested since 1896. A firm believer in the importance of physical education, French nobleman Pierre de Coubertin is credited with their revival.

De Coubertin initially posed the idea in 1892 at a meeting of sports federations in Paris but received a lukewarm response. However, de Coubertin was determined and two years later organized another meeting of the federation representatives to pitch his idea again. This meeting resulted in strong support and the foundation of the International Olympic Committee, which chose 1896 as the date for the inaugural games. Although de Coubertin wanted the games to be held in France, the other delegates convinced him that Athens was the best locale for the rebirth. The IOC also decided the Olympics should take place in a different city every four years.

The next edition of the games was in 1900 in Paris but it can hardly be called a success. Held as part of the 1900 World’s Fair, the Olympics were heavily overshadowed by the exhibition, and some of the approximately 1,000 athletes who competed were unclear as to whether they had participated in the Olympics or sporting events linked to the fair. Of note is that the 1900 Paris Games did produce the first female Olympic champion in Helene de Pourtales, who won sailing gold for Switzerland.

Over the course of the next several decades the Olympics were held every four years with the exception of the 1916 games, which were canceled due to World War I. In 1921, it was decided to add a winter version and the first Winter Olympics were held in France in 1924.

World War II caused the games to be canceled again, in 1940 and 1944, and there have been several boycotts by various countries throughout the event’s history.

Both the summer and winter editions took place in the same year until 1992, when it was decided to shift the Winter Olympics by two years so the events could be held separately.

Symbols of the Olympics

In 1920, the official symbol and flag of the Olympics — interlocking rings of blue, black, red, yellow and green, representing North and South America, Africa, Australia, Asia and Europe, on a white background — was flown for the first time at the Antwerp Games.

The Olympic flame was introduced to the modern games by the architect of the stadium for the 1928 Summer Games in Amsterdam. The basis for it comes from the ancient games, when sacred fires were kept burning during the competitions. The Olympic flame is lit in the form of a torch several months ahead of the games at the Temple of Hera in Olympia, Greece. It then travels in a Torch Relay until it arrives for the opening ceremony of the host city. The torch for these games will have visited all 47 prefectures before it arrives at the National Stadium on Friday.

Today, in addition to the Summer and Winter games, the IOC oversees several other sporting competitions. These include the Paralympics, Youth Olympic Games, Continental Games — Pan American, Asian, European, African and Pacific — and the World Games, which include sports that do not take place in the Olympics.

This is the fourth Olympics in Japan. Tokyo hosted the Summer Olympics in 1964 and staged the winter edition in Sapporo in 1972 and Nagano in 1998.

The next Winter Olympics are scheduled for Beijing in 2022, while Paris will host the next Summer Games in 2024.

Since Tokyo was awarded the 2020 Olympic and Paralympic Games in 2013, the government and Tokyo Organising Committee have built both temporary and permanent facilities. Two of the more ambitious projects are the new National Stadium and the Tokyo Aquatics Centre.

The stadium was based on the concept of harmony with nature and the architecture reflects that idea. The stadium’s height was restricted to less than 50 meters, so as to not disrupt the environment around Meiji Shrine. The structure has three stories above ground and two below, meaning athletes are actually competing below ground level. Not only does the stadium work to blend in with its surroundings, the facility’s exterior concourses boast plants and trees on their outer edges. The 850-meter-long Sora no Mori (sky forest) walking course surrounds the top level of the stadium, offering the public a chance to experience the blend of urbanism and nature.

Continuing the natural theme, the outer eaves of the stadium feature vertical lattices of wood, with the lumber coming from every prefecture to signify that this is a stadium for all of Japan.

Inside, the seats are colored in a palette of five earth-tone hues. The stadium has a capacity of around 60,000, including spaces for roughly 500 wheelchairs that are spread out across all three levels. The interior of the roof is constructed of steel and timber, offering the strength of steel and the warmth of wood.

Design consideration was given to ensuring the comfort of spectators and athletes with air channels designed to direct breezes from the outside down the seating tiers before rising up from the field, where the air has been warmed by the sun. The facility also has a misting system to help cool spectators at the entrance as well as several other places within the building.

From an environmental standpoint, the stadium is designed to collect and store rainwater to be used in its underground sprinkler system, allowing it to maintain a top-quality grass field. There is also a skylight at one end of the stadium designed to distribute optimal sunlight to the grass during winter.

A marvel of engineering, the National Stadium looks to be a sports mecca long into the future.

Opened in October 2020, the new Tokyo Aquatics Centre offers a modern and high-tech swimming and diving venue for the upcoming Olympic and Paralympic Games. Built by the Tokyo Metropolitan Government, this facility is set to become a regular on the national and international swimming and diving calendars for years to come.

The center has four stories above ground and one below with a seating capacity of around 15,000, which will be reduced to about 5,000 after the games are finished. It will host the Olympic swimming, artistic swimming and diving competitions, as well as the Paralympic swimming events. It has a 50-meter, 10-lane main pool and a secondary pool for training. Thanks to movable walls, both can be transformed into 20-lane, 25-meter-long pools. As the venue was built by the government, the facility will be open to the public, as well as swimming federations, following the Olympics and Paralympics.

The construction of the facility is noteworthy as the roof was first built on the ground before the 7,000-ton structure was completed and raised 37 meters, supported by four main pillars. By building it this way, the workers were able to complete the building more quickly as they were better able to work under the completed roof. The designers and contractors also had to work carefully to adhere to the extremely strict measurement guidelines dictated by the International Swimming Federation, which regulates Olympic pool dimensions. In an effort to reduce the impact on the environment, the building boasts solar panels and a heat exchange system to help control the water temperature.

As the games aim to showcase and stress accessibility, the Tokyo Aquatics Centre also boasts universally designed toilets and special seating for wheelchairs that takes line of sight into consideration so users won’t be blocked when other spectators stand at particularly exciting moments.

One of the permanent facilities built for the Olympic and Paralympic Games, the Tokyo Aquatics Centre is both an architectural achievement and a facility that Tokyo residents and world-class athletes alike can share and enjoy.

As the games get underway, here are some trivia questions... 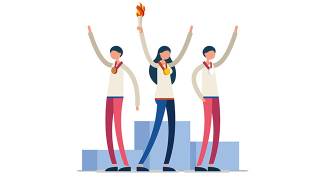