Despite being far from the largest metropolis in the country, the city of Nara in central Japan can easily feel overwhelming to visitors. Besides a history going all the way back to the eighth century when it served as the capital of Japan, the city also boasts the UNESCO World Heritage Site of the Historic Monuments of Ancient Nara, which consists of 78 buildings belonging to numerous Shinto shrines and Buddhist temples. And that’s still not taking into account Nara’s vast and stunning nature sites, like the Kasugayama Primeval Forest. But, when in doubt as to where to start the exploration of this ancient Japanese city, one only needs to follow the sun.

The best places to visit in Nara differ depending on the time of day. For example, between mid-June and mid-August, early mornings are the perfect opportunity for a little spiritual detoxing at Lotus Road. It’s an informal name given to four Buddhist temples located west of Nara Park that are famed for their lotus flowers. There is no better way to start a day than renting a bike and visiting the Saidaiji, Kikoji, Toshodaiji and Yakushiji temples in the early hours of the morning, just when their lotus flowers start to bloom. Not only is it a treat to witness these little islands of color come to life amid a sea of green, it also teaches visitors about one of the main religions in the city.

After Buddhism was imported to Japan, it spread to the rest of the country from Nara. So to truly understand Nara, one must understand Buddhism, and the easiest way to do this is by studying lotuses. Because the flower rises above mud and dirt to become something beautiful, Buddhism has long considered it a symbol of enlightenment that should inspire humans in their journey toward inner peace.

From Lotus Road it’s a straight shot east toward a meeting with Nara’s most famous residents: the deer of Nara Park. Numbering around 1,300, Nara’s deer are considered to be messengers of the gods due to a legend that Takemikazuchi no Mikoto, the deity enshrined at neighboring Kasuga Grand Shrine, first arrived in Nara riding a deer.

The deer have become famous in part thanks to the shika senbei deer crackers that tourists and local residents buy and feed to the animals, but there’s another way to create everlasting memories centered around the feeding of these godly denizens. In the summer, a representative from the Nara Deer Preservation Foundation arrives at Tobihino (a spacious field near Kasuga Grand Shrine) every Sunday morning at 9:30 and blows a horn that summons dozens of deer from the surrounding area. As they gather around, the representative then feeds them acorns. Spectators can later feed the animals some crackers, but they need to get there early as this event only lasts about 15 minutes. Depending on the year, the horn performance may take place on a different day of the week. Be aware that feeding the deer with something other than shika senbei is prohibited.

But the city’s deer don’t congregate just around Nara Park. They can also be found around Mount Wakakusa. Standing 342 meters high and consisting of three hills, Mount Wakakusa is also home to the Uguisuzuka kofun, a historical tomb dating back to the fifth century. During the day, the mountain offers great hiking trails as well as chances to take one-of-a-kind pictures of the surrounding scenery. But once the sun goes down, the site becomes something else entirely. At night, Mount Wakakusa offers a spectacular panoramic view of Nara’s cityscape, considered by some to be among the best night views in all of Japan.

Mount Wakakusa can be reached via taxi, but in the summer, there is also a bus that goes all the way to the top of the mountain on weekends and public holidays, departing from both JR Nara Station and Kintetsu Nara Station. The fare for a roundtrip is ¥600 for adults and ¥300 for children, a small price to pay to end a day of exploring the ancient, fascinating city of Nara in the most memorable way possible.

A TEATIME SET INSPIRED BY VERMEER, AT MESM

This spring, Mesm Tokyo is offering a range of artful delights imbued with seasonal hues and flavors.

Through June 30, bar & lounge Whisk invites guests to indulge in the second iteration of their Afternoon Exhibition, an afternoon tea set featuring sweets and mocktails inspired by iconic works of art. The latest offering is inspired by Dutch painter Johannes Vermeer’s representative work, “Girl with a Pearl Earring.”

The centerpiece of the set is a cake that takes visual cues from the captivating stare, distinct turban and large pearl earring of the painting’s subject. The fluffy texture and exquisite taste of its rose mousse exudes an elegance befitting the grace of the girl depicted in Vermeer’s opus, and its exterior layer of mascarpone invokes the hues of her skin. Surrounding the cake is a crepe and white chocolate finished in Vermeer blue, mirroring the expressive colors of the girl’s turban. Next to the crepe is a round candy resembling a pearl, containing a buttery orange sauce to be relished with the crepe.

The cake is accompanied by olive and tea scones and a quiche with bacon and Dutch cheese. Rounding out the set is a pineapple-based mocktail, accented with a tinge of ginger and pink pepper to complement the cake’s fresh sweetness. The set (¥4,950) is available from 2 to 4 p.m. on weekdays and limited to 15 people per day.

Mesm also invites guests to visit the restaurant Chef’s Theatre, which is offering its Winery spring lunch program (¥5,700) and Flower Language spring dinner program (¥11,400) through May 31. The lunch program takes guests on a voyage through France as they savor pleasant dishes complimented by regional wines, while the dinner program features a course of dishes, each based on a specific spring ingredient’s symbolic meaning. The program’s meat dish, for example, includes bamboo shoots — symbolizing “strength” ­— with lamb and Swiss cheese. 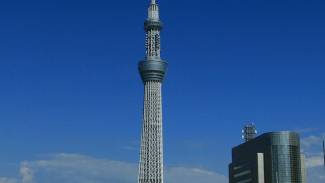 WATERFRONT SHOPS AND TOKYO CITYSCAPES The 634-meter Tokyo Skytree, a...